December 15th is when the list of the accepted students for Scott Alan’s Master Classes comes out. A full month. And there is plenty to do between now and then…
I am officially working at the Christmas Tree Place on Route 1 in . In fact, I’ve been working there for the past week and a half now getting it all ready for the way too fast approaching holiday season. Picture me, with my grundgy clothes on, with one of these on my back:

So today is the day my Scott Alan Master-Class essay is due, and I just sent it in. I am hoping for the best and be chosen to participate in Alan's free master classes over the next year, but I'm sure there are many others that have put their heart and soul into their essay about how they can't live without theatre. If anything comes from this, it will be the experience of writing this essay. It was such a joy to write it and really put out why theatre is so important to me. It brought my understanding of my connection with theatre to a whole new level.

And here it is! I hope you enjoy it.

Wow... So much has happened since my last entry, and it hasn't even been a week!

Well, I made the decision to step out of Essex Steam Train's production of "The North Pole Express". After much thought, chatting with family and friends both in and out of the production, and really stepping back and listening for that true answer. I was talking with my grandmother about it and she put it so great when it came to hearing that true and right answer; "How will I know it's the right answer?". "It'll feel like an elephant stamped on your foot," she said. And it did, a big ol' elephant foot right on my toesies. It came that I need to be working on some other stuff now to continue getting me ready for my big move. At this point in my life, when I am about to make a major change that will in turn affect the rest of my life, the commitment of the Essex Steam Train production just did not seem plausible anymore.

I was very worried about how this would come across when I officially pulled myself out. The last thing I wanted was to look like I was quitting. I personally feel it is quite the opposite. With where I am now, I know that I will not be able to give 100% of myself to this piece, fulfilling the integrity of the production as well as be at the best level as I can. Over and over I expressed my apologies to the creator about how late this news was coming, but that I really had to do a lot of soul searching and that I wanted to talk with him in person about it. Luckily, he took it really well plus there will be someone who can fill my place.

Thank you Essex Steam Train's Fright Train for teaching me that sometimes it's better to step away when it feels you need to be somewhere else, even if it's a paid gig.

Jeez... I seem to always start these entries with the more serious topics... Sorry, I guess I just want to get it all out so I can focus on the fun stuff. :-)

I got to go to Cheyenne Jackson's concert at Carnegie Hall with Michael Feinstein this past Friday. I went with my mother and we had such a blast! The concert was absolutely beautiful, and Cheyenne was phenomenal. The ease at which he sings astounds me. I was SO happy that he sang my favorite song off of his album, "Someone to Watch Over Me". I can literally have that on repeat in my stereo for hours. I will definitely be singing that in my cabaret, there is no doubt about that.

I also got to wait backstage in the reception room to say hi after the show [I made the list!! :-)]. Due to my giant self, I stood heads above others naturally, and as Cheyenne was making his way over, he caught my eye and smiled. It was so great to see him and be able to congratulate him in person on such a wonderful concert. My mom wanted to take a picture, so Cheyenne and I got ready, but of course the camera wasn't working, and I immediately started sweating. He went to sign someone else's CDs as I got my Blackberry out for my mom to use. I was SO embarrassed. But the picture turned out well. 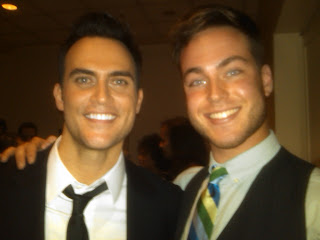 While we were chatting, Cheyenne asked, "Did you get my email???" Immediately I thanked him and went into how much it meant to me to get that from him. I felt weird cause you know you never send a thank you for a thank you. I did follow up the weekend with a quick email to Cheyenne congratulating him again on the concert, that I'm looking forward to his next work on "Glee", plus how much him email truly meant to me and how I use his advice daily. It was a great night!

My mom sent me an email a while ago about a workshop for auditioning led by two of the current company members of Goodspeed's production of "How to Succeed in Business Without Really Trying", which my parents and I saw a few weeks ago. The production was phenomenal and so professionally done. The talent was top notch, but what I found even more impressive was the execution of the beautiful direction and inventively precise choreography.

The workshop was advertised as a place for high school students to get feedback for their college auditions... Hmmm... I signed up anyway. I thought, why not? Feedback in any format from professional actors is great. So there I was, 23-year-old Schuyler among ten other high school girls. :-)

The workshop itself though was amazing. I learned so much about what a great audition consists of. I saw the audition in two sections all of a sudden: Schuyler's part and (Character's Name)'s part. Here are some of the notes I took...

Schuyler's Part -
(Character's Name)'s Part:
The two guys leading the workshop, James Beaman and Richard Vida, were so great and gave me awesome critique on my performance of "Old Devil Moon". I found out that I don't need to add flourishes to show my range; people are able to hear that I have higher notes just by my vocal quality. Those flourishes can actually sometimes be seen as cocky... EEEEEE.... I definitely did that in my singer audition for La Cage. But, there's nothing I can do about it now except not do it again. Jamie and Richard completely reworked "Old Devil Moon" for the better and I can't wait to use it again. Big thanks for Richard and Jamie for all their help!

So where am I now...? It's November. I go to Florida to be the sprint coach for the Middlebury Swim Team's training trip right after Christmas, come back and go right up to Middlebury to choreograph Urintetown: The Musical. After a month there, I come back to move into the city officially.

What do I need to do? What do I want to do? Well, I am looking for a job. I may work at a Christmas tree place, I'll be babysitting, and whatever else I can find. I'll be singing in a few choir performances (be sure to check my facebook fan page soon for details...). And I have a long list of theatre related work. I have decided to carve out a few hours everyday, dedicated to my theatre work, no matter what. Here's what I'll be chipping away at:
There's probably more, I just can't think of it all now. I'm looking forward though to these two months to really get my butt into gear and get myself prepared in many ways so I can have options in my back pockets when I move to the city.
Posted by Sky at 9:30 AM 1 comment: